The hydrogen economy is gaining momentum and Linde is playing a key role in helping manufacturers unlock the potential of this light gas. Linde can help companies in hard-to-abate sectors meet their decarbonization targets by improving efficiency and providing applications that reduce and/or capture CO2 emissions. 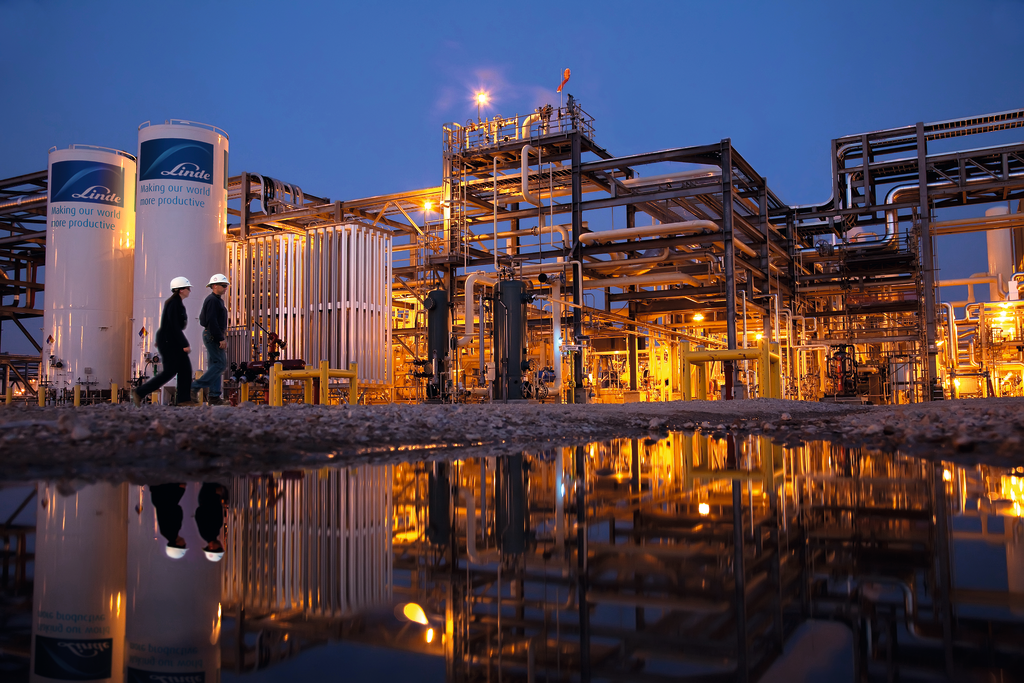 Hydrogen could be the answer in hard-to-abate industries.

The steel industry is responsible for roughly 5% of global CO2 emissions, and finding ways to reduce emissions is high on steelmakers’ agendas. ArcelorMittal Europe, for instance, announced its target to reduce CO2 emissions by 30% by 2030 and targets carbon neutral operations by 2050.

Using hydrogen as a combustion fuel has become an increasingly interesting area of research as steelmakers look to lower their reliance on fossil fuels to lower emissions. When hydrogen fuel burns, it reacts with oxygen and is converted back into water. With steam as the only by-product of hydrogen combustion, hydrogen offers a promising option to tackle emissions. In DRI, for instance, it can be used to replace natural gas to drastically reduce carbon emissions. Another path is to use hydrogen in the blast furnace, which allows for up to 20% of emissions reduction. 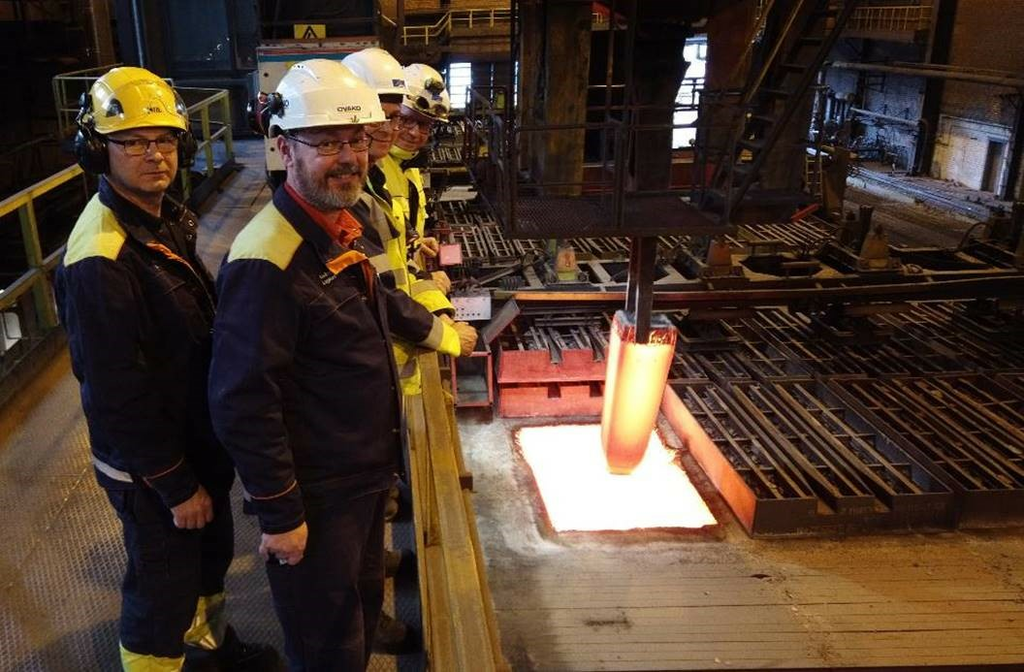 Hydrogen passes the test for heating steel. Linde and Ovako engineers at the pit furnace, Stockholm.

Hydrogen can be also used for reheating before rolling, as Linde and Ovako successfully demonstrated in 2020. Hofors, a small town 2.5 hours north of Stockholm, was the scene of the first-ever full-scale test of heating steel using hydrogen as a fuel and oxygen as an oxidant before rolling. Carried out as part of a collaboration between Ovako and Linde, the test took place in one of Ovako’s pit furnaces at the Hofors rolling mill.

Traditionally, propane is used to heat the pit-furnaces where steel ingots are heated to temperatures above 1200oC before they are rolled into different shapes for further processing. But during this test, the Ovako furnace was heated using hydrogen. Rather than coming from oil, hydrogen fuel was created through electrolysis – the process of splitting water into hydrogen and oxygen using electricity.

Comprehensive analysis of the steel following the test revealed that heating with hydrogen did not adversely affect the steel’s quality. This positive outcome lays the groundwork for introducing hydrogen as fuel for heating in full-scale rolling mill furnaces, which can help reduce the steel industry’s environmental impact. Learn more about this success story here.

Switching to low-carbon operations in the steel industry will take several years, but a range of existing technologies can already help the industry make significant reductions to its emissions today. Explore the diagram below to learn more. 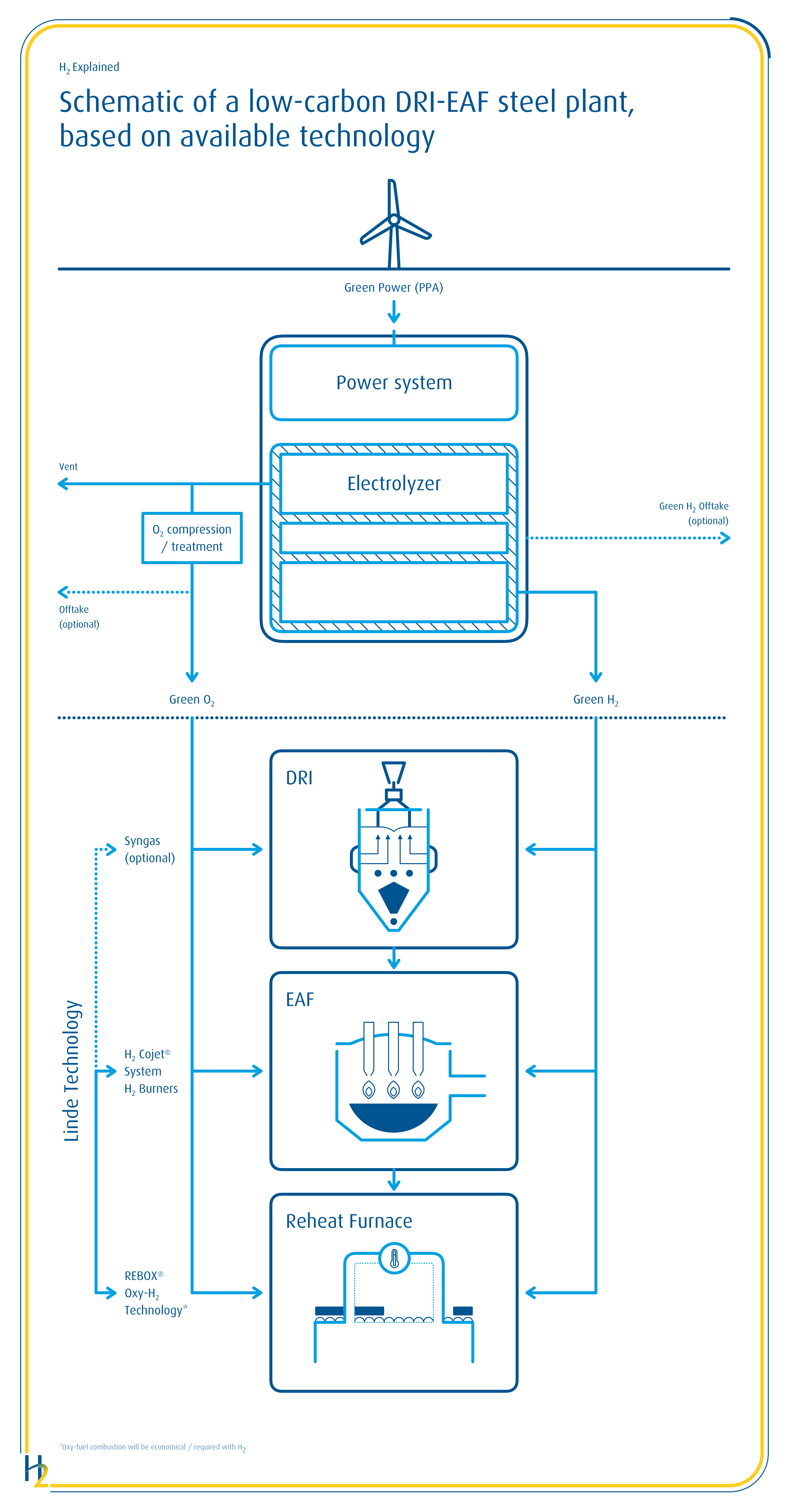 Linde offers synthesis plants for the production of ammonia (NH3) or methanol (CH3OH), converting produced hydrogen and nitrogen into ammonia, and respectively, converting CO2 and produced hydrogen into methanol. When green hydrogen is utilized as a feedstock, these products are called green ammonia and green methanol. Cryogenic plants are used to liquefy hydrogen so it can be transported and stored using less space than in its gaseous form. They cool the volatile gas down to minus 253 °C to create liquid hydrogen (LH2). In addition, we offer turbo-compressors for hydrogen and LH2 pumps. 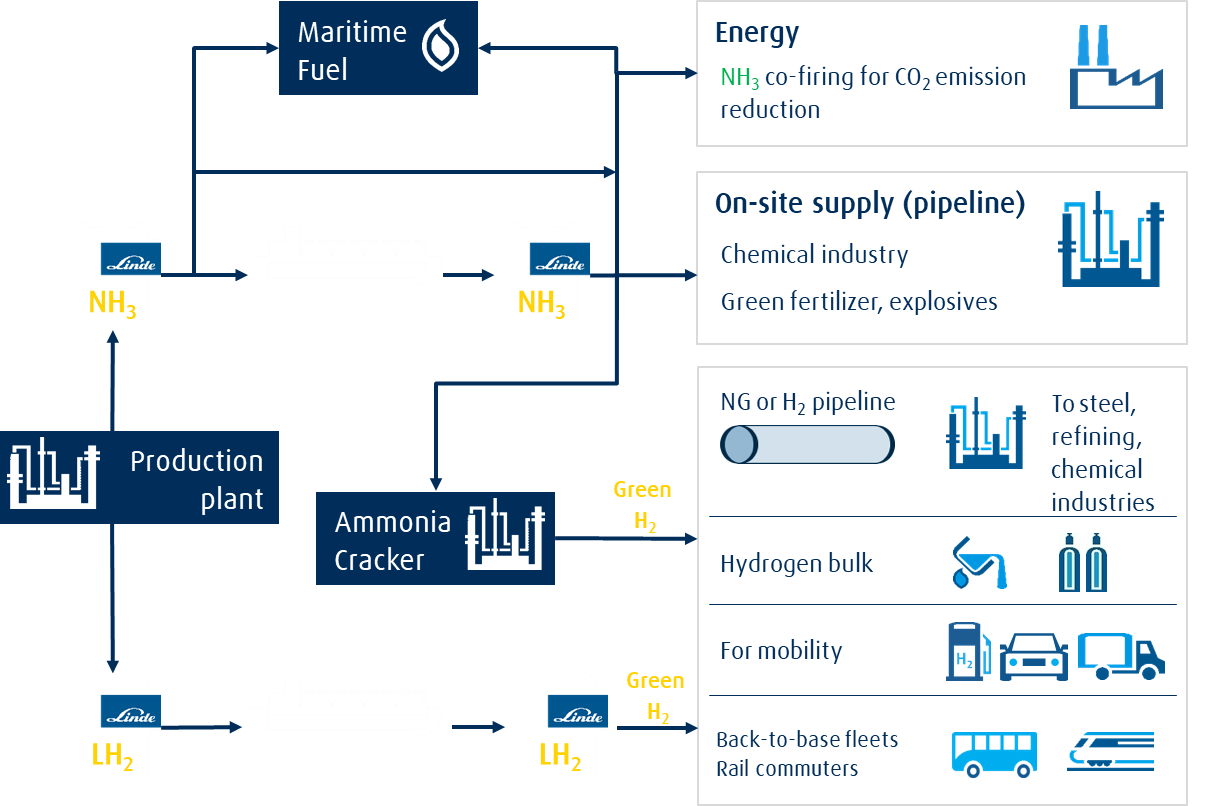 Ammonia production, for instance, is a heavy contributor to harmful emissions. Every year, roughly 190 million tons of ammonia are produced globally – using green hydrogen to produce ammonia is therefore a promising path toward a more sustainable future.

Hydrogen is used abundantly by petrochemical companies for the desulphurization process. Using green hydrogen during this process will contribute to achieving the ambitious decarbonization targets set by the industry. 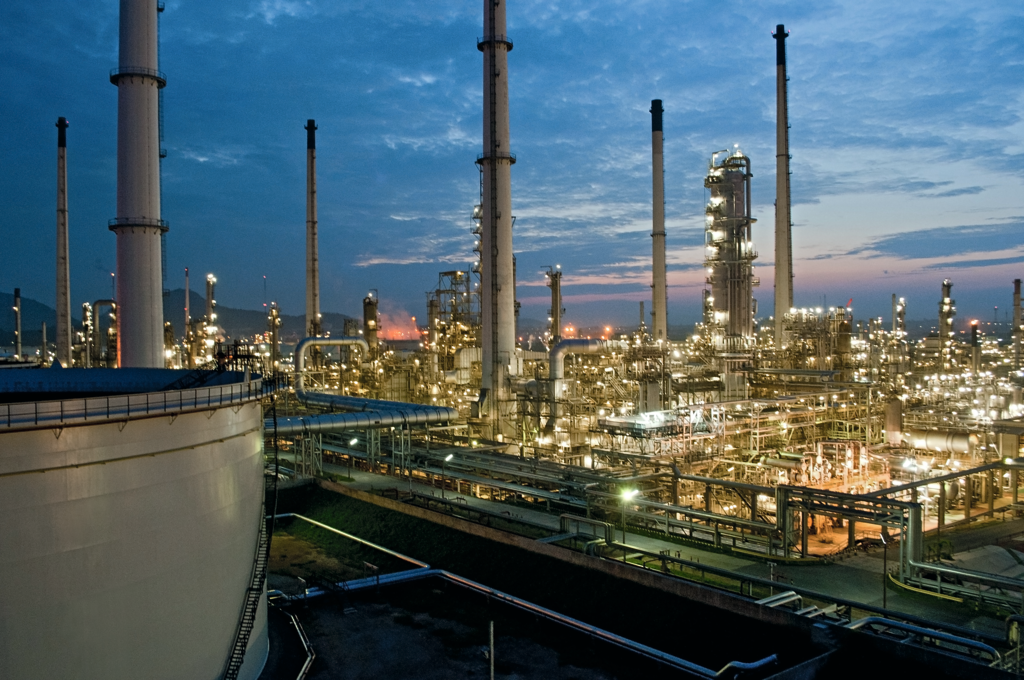 One example, in which Linde is involved, is the REFHYNE project - Clean Refinery Hydrogen for Europe. Funded by the European Commission’s Fuel Cells and Hydrogen Joint Undertaking (FCH JU), the project will install and operate the world’s largest hydrogen electrolyzer in Shell’s Rhineland Refinery in Wesseling, Germany. The first phase comprises a 10MW electrolyzer, while phase II will target the construction of a 100 MW electrolyzer.

Carbon Capture for Use or Storage
Electrolysis for green hydrogen 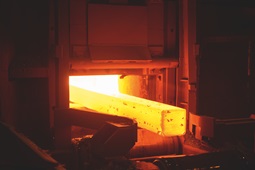 In this whitepaper produced in conjunction with Reuters, we look at different options available today for decarbonizing the steel industry.

Find out more about REFHYNE - Clean Refinery Hydrogen for Europe