Hydrogen: Carrying the hopes of a cleaner future

Hydrogen is the most abundant element in the universe. Even though it’s light and small, hydrogen is a powerful energy carrier – one kg of hydrogen carries three times the energy of kerosene. It can be used to store excess renewable energy and then transported underground through an extensive network of pipelines or overland by truck to be applied to a wide range of applications, from mobility to heavy industries. Due to its versatility, hydrogen is proving to be a key enabler of the transition to low and zero-carbon energy – clean energy, to help meet climate change targets.

The big picture: Watch "Our world and the future of hydrogen" video.

The threat of climate change

The effects of climate change – global warming plus the corresponding shifts in climate patterns – are increasingly visible on the environment, society, and the global economy. Climate change is not a distant threat – it is happening now. 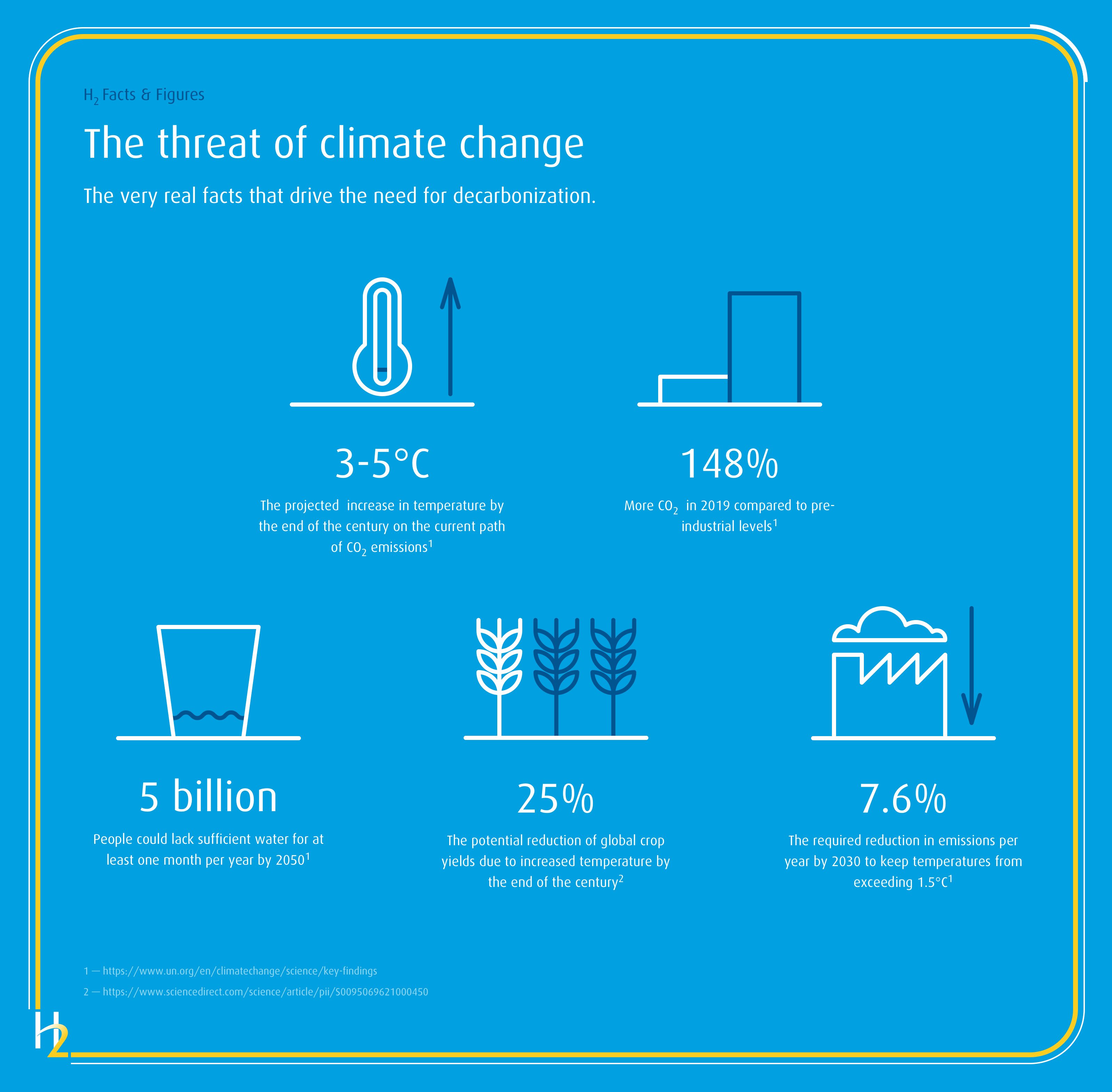 It's happening now. The very real facts that drive the need for decarbonization.

The Paris Agreement, an international treaty on climate change, was adopted in 2015. Its goal is to limit rising temperatures to well below 2°C, preferably to 1.5°C, compared to pre-industrial levels, through a reduction of greenhouse gas emissions, increase in the share of renewable energies and improvements in energy efficiency.

As a result, more and more countries, regions, cities and the companies that serve them are establishing ambitious carbon neutrality targets and looking for solutions that will allow them to reach those goals – hydrogen is set to play an important role in a new energy system.

Hydrogen as an enabler of decarbonization

To tackle climate change, countries around the world are putting in place ambitious plans to transition to low-carbon sources of energy, with hydrogen at its core. It is a versatile, clean and safe energy carrier that can be used as fuel or as industry feedstock. When used in a fuel cell, it produces zero emissions as it only emits water vapor, setting it as a strong contender to decarbonize transportation. It can be stored and transported at high energy density in liquid or gaseous form and be made available for a wide range of applications to lower their carbon footprint all the way to zero emissions.

With increased scale of clean hydrogen deployment and subsequent improvement of related technologies, from a total cost of ownership (TCO), hydrogen could be the most competitive low-carbon solution in more than 20 applications by 2030, including long-haul trucking, shipping, and steel.2

Watch the video to understand how hydrogen is an enabler of decarbonization across different applications.

The path to green hydrogen

Hydrogen is colorful – depending on its net carbon dioxide emissions intensity, production method and feedstock content, a different color will be attributed, with green hydrogen being the ultimate goal.

At Linde, we have been harnessing the power of hydrogen for over 100 years and are making continued investments in effective and economic ways to deliver gray, blue and, ultimately, green hydrogen.

We can produce hydrogen from a range of feedstocks and natural resources. Using processes like steam reforming, we generate gray hydrogen from natural gas, liquefied petroleum gas (LPG) or naphtha, which is the most common, and cheapest, hydrogen production process today. This process can be converted into blue hydrogen production by adding carbon capture and storage technologies. And, to generate green hydrogen we use electrolysis technology with renewable energy as feedstock. An alternative production method is steam methane reforming with biomass as feedstock.

A colorless gas described in colorful terms? Watch the video to find out why.

Carbon Capture for Use or Storage
Electrolysis for green hydrogen

championing the use of h2 on a global scale

Linde is proud to be part of a diverse and inclusive coalition of climate champions.

Find out more at climatech2ampion.org